You Are Here:Home / Blog / Alcatraz of the Rockies: The Most Secure Prison in America
Blog December 8, 2017

Alcatraz of the Rockies: The Most Secure Prison in America

Situated 5,000 feet above sea level on a barren expanse of land in the sandy, arid foothills of Colorado’s southern Rockies is a place that has been described by those who have been there as “hell on earth.” It’s here, 100 miles south of Denver near an old mining and railroad town, that the most dangerous criminals in the U.S. federal prison system reside.

The United States Penitentiary Administrative Maximum Facility – known unofficially as “ADX Florence” or “Supermax” – is the most secure prison in America. Only those convicted of the most violent (and often high-profile) crimes are sent here, sentenced to live out their days in solitary confinement under the tightest security conditions imaginable.

The prison’s infamous interior is no less foreboding, filled with cramped cells with little natural to no light and concrete slab beds. It’s this extreme approach to prison security that has earned ADX Florence the nickname “Alcatraz of the Rockies.”

ADX Florence: Home to the Nation’s Most Notorious Inmates 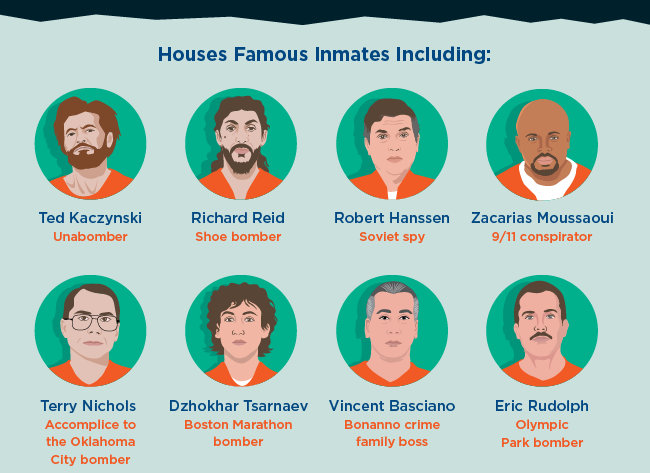 ADX Florence houses many of the nation’s most violent criminal offenders – those convicted of committing heinous crimes such as terrorism and multiple murders.

As the former director of the Federal Bureau of Prisons Noman Carlson once said, ADX Florence was built for “a very small subset of the inmate population who show absolutely no concern for human life.” Today, the complex houses around 410 male inmates.

A number of high-profile double agents have been sentenced to life terms at ADX Florence, including former senior FBI agent Robert Hanssen. In 2002, Hanssen pleaded guilty to espionage for passing classified information to the Soviet Union and Russia over a 20-year period in exchange for more than $1.4 million. Several U.S. intelligence agents were executed by foreign governments as a direct result of Hanssen’s actions.

Prisoners with High Risk of Escape and Violence

The remainder of the inmate population is made up of inmates who are deemed a high escape risk and inmates with histories of committing violent crimes against corrections officers and their fellow prisoners. In fact, almost 95% of ADX inmates have a history of violent behavior at other prison facilities.

One of these men – Thomas Silverstein – actually inspired the construction of ADX Florence. Incarcerated continuously since 1977, Silverstein was convicted of four separate murders during his imprisonment. In 1983, he attacked and killed a prison guard at the Marion Penitentiary in Illinois.

A Glimpse Inside Alcatraz of the Rockies

Unlike the majority of U.S. prison complexes, ADX Florence was designed and constructed with solitary confinement in mind. Originally, it was built as a sort of temporary punishment for inmates who committed violent crimes against officers and other inmates while incarcerated at other prisons. Eventually, after exhibiting good behavior, those inmates would be allowed to return to their original lower security facilities.

But over time, as domestic and foreign terrorism has continued to rise, ADX has transformed into a permanent residence for the nation’s most violent and high-profile criminals. And it’s worked – since the prison opened in 1994, there have been zero escapes or serious escape attempts.

So, how does Supermax do it? The prison – which has been called “the toughest prison in America” – is known for its extreme security measures and control of inmates. ADX Florence was built to restrain the nation’s worst offenders by limiting their freedoms to the bare minimum – and it has succeeded. These days, those who enter rarely ever leave again. 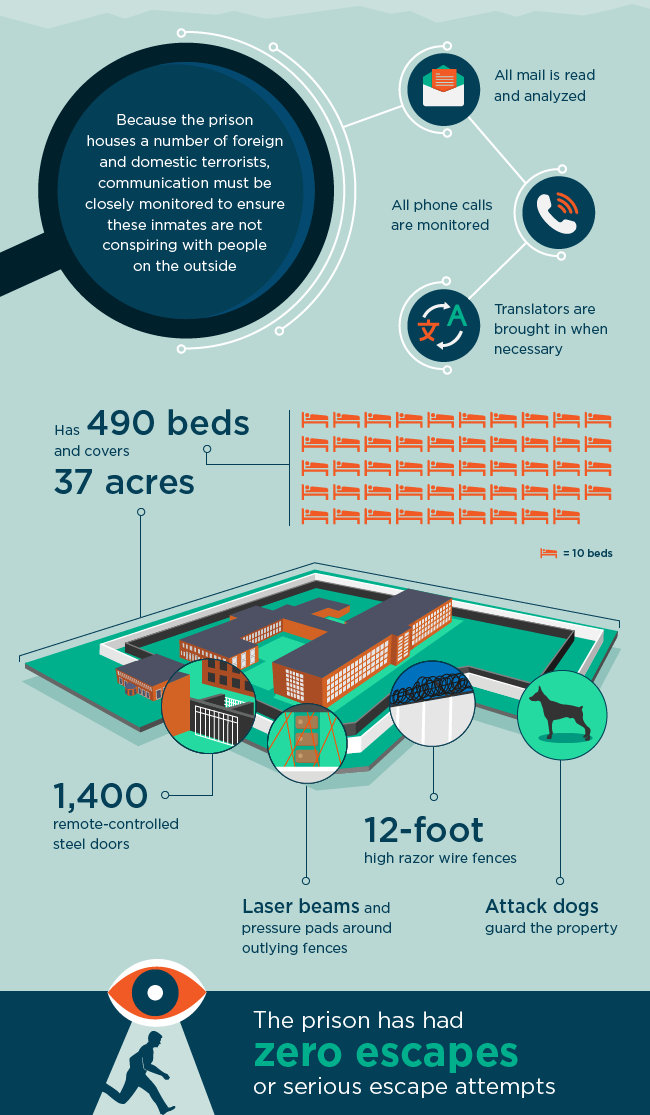 ADX Florence is part of the Florence Federal Correctional Complex, and shares a campus with three other lower-security federal prisons.

The property covers 37 acres and is secured by 12-foot high razor wire fencing. Laser beams and pressure pads were installed near the outlying fences to alert guards in case of an escape attempt. Armed gunmen with specially trained attack dogs patrol the grounds, and sharpshooters monitor the property from above in a dozen surrounding watchtowers.

There are few windows, and 1,400 remote-controlled steel doors are the only means in or out of the prison. In the event of an escape attempt, guards have the ability to instantly shut and lock down every door within the complex. Motion detectors and cameras cover the entire property, and are monitored constantly by guards in the prison’s control center.

On the inside, ADX Florence is sterile, bleak, and eerily silent. It was designed to disorient anyone who enters, and prevent them from knowing which direction they’re facing, or how to find a specific area of the prison. Everything – from the floors to the walls to the furniture – is made of solid concrete. You won’t see a single trace of the outside world; not so much as a single blade of grass.

Supermax houses 490 inmate beds, roughly 410 of which are currently filled. The rooms are small in size – only 12 feet by 7 feet – and surrounded by thick concrete walls and double metal sliding doors. A single window, 3 feet high and 4 inches wide, is the only source of natural light. By design, only the sky is visible through the window, to ensure that prisoners can never gauge their cell location within the complex to plan an escape.

Each cell is equipped with a small, unmovable concrete stool, a combination sink-toilet, and an automated shower. For a bed, inmates sleep on a concrete slab topped with a thin foam mattress. Assuming good behavior, inmates are allowed a 10-inch black and white television with access to basic educational and recreational programs – but no news channels.

The rooms are heavily soundproofed to prevent the inmates from communicating with one another through the walls, and the doors are covered solid to block any view of the corridors.

All inmates at ADX Florence are assigned to one of six security levels. Confined within the very center of the prison complex is the highest security unit, the “Z Unit” – also nicknamed “The Black Hole.” Reserved for only the worst-behaved inmates, this unit is fully soundproofed, darkened, and equipped with full body restraints built directly into the concrete bed. The Z Unit has space for up to 148 prisoners.

One notch below the Z Unit in terms of security is the H Unit, also called the Special Security Unit. The cells here are also equipped with full body restraints, and many of the convicted Islamic terrorists are housed here. Inmates may be moved between the various levels of confinement as a punishment for bad behavior or a reward for good behavior.

A Day in the Life of an ADX Prisoner

There’s no two ways about it – life within the walls of the “Alcatraz of the Rockies” is lonely, isolating, repetitive, and grim. Inmates are granted only what they need to survive – food, water, and shelter – and little else. Of those who enter, few will ever see the surrounding mountains, trees, grass, or outside world again.

Prisoners at ADX Florence are kept in solitary confinement within their cells for 23 hours a day. They are permitted one hour of solitary recreation time per day in a concrete pit with a pull-up bar, which former inmates have described as resembling an empty swimming pool.

Sometimes, their one hour of recreation time takes place instead in a “recreation cage,” where the prisoners can see the sky and feel the fresh outdoor air. This space is just large enough for inmates to walk 10 steps in a straight line, or 31 steps in a circle, and is the closest they will get to seeing the outside world during their sentence.

ADX inmates are allowed 3 showers per week, with the cell showers operating on an automated timer. Meals are received through a small slit in the steel door, and the food is carefully selected to ensure that inmates can’t use it to injure themselves or others, or create unhygienic conditions within their cell.

Inmates who exhibit good behavior may be allowed to purchase a small black and white TV for their cell, although this is typically the first item taken away if punishment is required. Inmates with good behavior may also be allowed to purchase candy, books, and other small goods for personal use. Prisoners may choose to entertain themselves by reading, writing, watching TV, sleeping, doing pushups, or staring at the sky outside their window – all from their 12×7 foot cell.

For many prisoners at ADX Florence, the most difficult part of their sentence is the isolation. Inmates here are granted almost zero contact with anyone other than prison guards and staff. Attorney visits are conducted through plexiglass walls, and inmates with good behavior are allowed one monitored 15-minute call per month to an approved relative. On occasion inmates are allowed to send and receive letters, but all of their mail is limited in length, opened, read, and analyzed.

Anytime an inmate leaves his cell, he is escorted by at least three armed guards and required to wear handcuffs, shackles, and belly chains. For many of the ADX prisoners, this is the most human contact they will receive during their sentence – possibly for the remainder of their lives.

The U.S. Penitentiary Administrative Maximum Facility has been praised by government officials and correctional experts for its rigidity, and it is often meant as a compliment when it is called the “toughest prison in the nation.”

However, there are those who oppose the prison’s extreme use of solitary confinement, and argue that it is a form of cruel and unusual punishment. Prisoners’ rights organizations believe that this level of isolation and lack of human interaction has the ability to cause real and lasting harm to inmates’ psychological health, causing conditions like claustrophobia, insomnia, hallucinations, paranoia, impulse control, and hypersensitivity to stimuli. Some former inmates have even cited prolonged solitary confinement as the trigger of their violent outbursts against correctional officers.

Additionally, federal prison officials have come under fire for sending criminals with preexisting mental illnesses and disabilities to ADX. Indeed, an estimated 70% of ADX prisoners meet criteria for at least one serious mental illness.

According to some, even the conditions at the infamous Guantanamo Bay are more humane and tolerable than those at ADX Florence. Several inmates have attempted and successfully committed suicide, as recently as in 2013.

In 2012, 11 inmates and their attorneys filed a federal class-action lawsuit against the Federal Bureau of Prisons and officials who run ADX Florence. In their argument, they stated that the prison has failed to properly diagnose prisoners with serious mental illnesses, and that the extreme use of solitary confinement in the prison was both cruel and harmful. Settlement negotiations are still underway.

No matter how you look at it, one thing is for certain: with a record of zero escapes or serious attempts, ADX Florence is the most secure prison in America. And with few prisoners who enter Supermax ever leaving as free, rehabilitated men, would-be inmates just might think twice before earning themselves a spot at the Alcatraz of the Rockies.

Law enforcement facilities, especially those requiring armed guards need secure but accessible firearms storage and weapons racks that are scalable to their needs. Systems and Space specializes in creating storage solutions for police departments and the US military,  including evidence lockers, weapons storage and more. Serving clients throughout California.